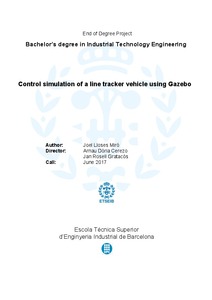 Document typeBachelor thesis
Rights accessOpen Access
Abstract
The process of designing the control strategy for mobile robots may turn into a difficult task as can appear difficult dynamisms on a mechanical an electronic level that are difficult to model and, besides, its testing can mean a lot of time and high costs. In this project, it is introduced a simulator environment based on Gazebo to fulfil the need of implementing robot behaviours and control algorithms in a more efficient and productive way. Gazebo is one amongst several software platforms for simulation and robot control. It has an open source program distributed by Apache 2.0 and is being used widely by the robotics community. It has an easy-going interface, a learn-by-doing program and a growing community. Its easy programming interface has been very useful for most of the project development, which has been focused on the implementation of a line follower robot developed by other ETSEIB student within their Final Grade Project. The challenge has been to reproduce in a virtual level the vehicle navigation and performance and the environment conditions. For this reason, has been required a global vision of the robot’s functionality. This project is organized with a first part of Gazebo software description, followed by the robot implementation to the simulator, the control design and architecture, and a final part with the experimental results of the simulation.
SubjectsMobile robots -- Automatic control, Robots mòbils -- Control automàtic
URIhttp://hdl.handle.net/2117/111138
Collections
Share: