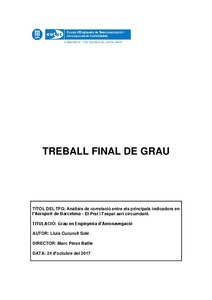 Except where otherwise noted, content on this work is licensed under a Creative Commons license : Attribution-NonCommercial-ShareAlike 3.0 Spain
Abstract
Taking into account the increases in operations and passages received by the Barcelona-El Prat airport, and the predictions of increasing the air traffic congestion predicted by 2030, the European Union created a commission to study and analyse the effects and needs that will be deviated from an increase of twice the demand of today. The SESAR project is the solution, which is a set of research groups trying to achieve the objectives sealed by the needs of European airspace operators and their citizens. In this project, have been used the main KPIs in order to analyse and quantify the following KPAs: capacity, punctuality, equity, operational efficiency and safety that affect the Barcelona-El Prat airport and its airspace. In order to observe if the hypothesis formulated and the objectives set by the SESAR project will be possible to achieve in the airspace that surrounds Barcelona airport. To do so, different sources of data have been used which have provided different information in each case and have allowed to analyse different KPA with their respective KPI. These sources have been NEST data, which are historical data managed by EUROCONTROL, and the ADS-B data received by the receiver that the ICARUS research group has installed on the roof of EETAC. In general, the results obtained show a decrease of the different KPI when capacity is increased. Corroborating the vast majority of the hypotheses made. In addition, they allow us to identify which areas will be more difficult to achieve the objectives set by SESAR, which SESAR should allocate more resources to study them.
SubjectsAirports -- Control, Airports, Aeroports -- Control, Aeroports
DegreeGRAU EN ENGINYERIA D'AERONAVEGACIÓ (Pla 2010)
Location
1: Aeroport de Barcelona-El Prat (BCN), 08820 El Prat de Llobregat, Barcelona, Espanya
URIhttp://hdl.handle.net/2117/111098
Collections
Share: