Incidence of pollution on precipitation processes in the Barcelona Metropolitan Area 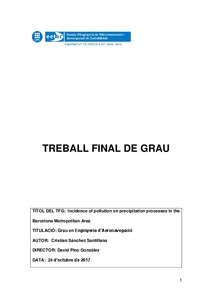 Document typeBachelor thesis
Rights accessOpen Access
Abstract
The amount of pollution during the past years has grown an 8% worldwide, worsening the air quality and affecting hundreds of urban areas. The objective of this project is to determine if this rising is affecting in some way precipitation processes, using the Barcelona Metropolitan Area (BMA) as an example. Based on precipitation and pollution data of the past years (2005-2015), measured automatic stations scattered all around the MAB, comparing data of the pairs of close stations and that are of the same type. The comparisons, however, have not revealed any measurable relationship between concentration of pollutants and precipitation in the Barcelona area, probably due to the fact that the environment is not polluted enough, or because the pollution data is incomplete, as there are important pollutants missing on it (i. e. particulate matter).
SubjectsClimatology, Meteorology, Pollution, Climatologia, Meteorologia, Contaminació
DegreeGRAU EN ENGINYERIA D'AERONAVEGACIÓ (Pla 2010)
Location
1: Area Metropolitana de Barcelona, 08040 Barcelona, Espanya
URIhttp://hdl.handle.net/2117/111093
Collections
Share: