The low area probing detector as a countermeasure against invasive attacks 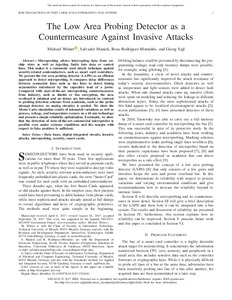 Microprobing allows intercepting data from on-chip wires as well as injecting faults into data or control lines. This makes it a commonly used attack technique against security-related semiconductors, such as smart card controllers. We present the low area probing detector (LAPD) as an efficient approach to detect microprobing. It compares delay differences between symmetric lines such as bus lines to detect timing asymmetries introduced by the capacitive load of a probe. Compared with state-of-the-art microprobing countermeasures from industry, such as shields or bus encryption, the area overhead is minimal and no delays are introduced; in contrast to probing detection schemes from academia, such as the probe attempt detector, no analog circuitry is needed. We show the Monte Carlo simulation results of mismatch variations as well as process, voltage, and temperature corners on a 65-nm technology and present a simple reliability optimization. Eventually, we show that the detection of state-of-the-art commercial microprobes is possible even under extreme conditions and the margin with respect to false positives is sufficient.

© 20xx IEEE. Personal use of this material is permitted. Permission from IEEE must be obtained for all other uses, in any current or future media, including reprinting /republishing this material for advertising or promotional purposes, creating new collective works, for resale or redistribution to servers or lists, or reuse of any copyrighted component of this work in other works
CitationWeiner, M., Manich, S., Rodriguez-Montanes, R., Sigl, G. The low area probing detector as a countermeasure against invasive attacks. "IEEE transactions on very large scale integration (VLSI) systems", 7 Novembre 2017, núm. 99, p. 1-12.
URIhttp://hdl.handle.net/2117/111056
DOI10.1109/TVLSI.2017.2762630
ISSN1063-8210
Publisher versionhttp://ieeexplore.ieee.org/document/8097013/