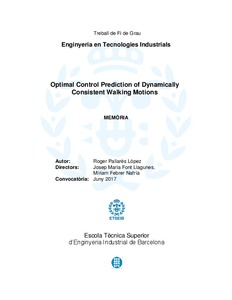 Document typeBachelor thesis
Rights accessOpen Access
Abstract
The main objective of this bachelor thesis in Industrial Technology Engineering is to predict dynamically consistent walking motions from kinematic and dynamic measurements obtained at the UPC Biomechanics Laboratory. A healthy gait cycle is captured and foot-ground contact forces are measured. Then, in order to acquire the new motions, optimal control techniques are applied. The human body is modeled with a multibody system formed by rigid bodies. Concretely, a twodimensional simpli ed skeletal model focused on the lower extremity is used in this work. It is formed by a total of 12 rigid bodies (trunk, pelvis and leg segments) and it has 10 degrees of freedom. The inverse dynamic analysis is performed using OpenSim, a free software tool developed by Stanford University that is widely used by the scienti c community. The optimal control algorithm to obtain dynamically consistent walking motions from experimental data is implemented in MATLAB. Moreover, the software used to solve the optimal control problem is GPOPS-II, a general-purpose MATLAB-based software for solving multiple-phase optimal control problems, developed by the University of Florida. Parameters of GPOPS-II are changed to study the in uence on the solution. Then, di erent formulations are analyzed to assess convergence and similarity between the new motion and the captured one. During this report, all the processes involved in the analysis and the related theory are detailed, as well as the methodology used. Theoretical background is presented and complemented with examples of other works. The skeletal model used is described in detail. The process to export and obtain the experimental kinematics and dynamics using OpenSim is explained step by step. Optimal control theory and GPOPS-II working environment, which are employed as the tool to predict new motions, are also explained. And nally, results are presented and discussed. This project is considered an initial study of optimal control techniques to predict human motion. Thereby, it allows to understand these techniques and gain knowledge about how they can be used in order to be applied, in the future, in more complex models.
SubjectsPredictive control, Human locomotion, Control predictiu, Locomoció humana
DegreeGRAU EN ENGINYERIA EN TECNOLOGIES INDUSTRIALS (Pla 2010)
URIhttp://hdl.handle.net/2117/111033
Collections
Share: