Impact of soil moisture on crop yields over Brazilian semiarid 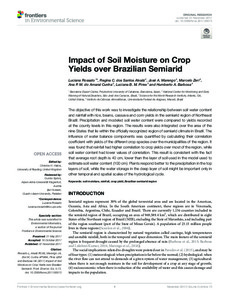 Show full item record
Rossato, Luciana
Alvalá Célia dos Santos, Regina
Marengo Antônio, José
Zeri, Marcelo
Cunha M. do Amaral, Ana Paula
Pires Bassi Marinho, Luciana
Barbosa Alves, Humberto
Document typeArticle
Rights accessOpen Access
Abstract
The objective of this work was to investigate the relationship between soil water content and rainfall with rice, beans, cassava and corn yields in the semiarid region of Northeast Brazil. Precipitation and modeled soil water content were compared to yields recorded at the county levels in this region. The results were also integrated over the area of the nine States that lie within the officially recognized region of semiarid climate in Brazil. The influence of water balance components was quantified by calculating their correlation coefficient with yields of the different crop species over the municipalities of the region. It was found that rainfall had higher correlation to crop yields over most of the region, while soil water content had lower values of correlation. This result is consistent with the fact that average root depth is 40 cm, lower than the layer of soil used in the model used to estimate soil water content (100 cm). Plants respond better to the precipitation in the top layers of soil, while the water storage in the deep layer of soil might be important only in other temporal and spatial scales of the hydrological cycle.
CitationRossato, L., Alvalá, R., Marengo, J., Zeri, M., Cunha, A., Pires, L., Barbosa, H. Impact of soil moisture on crop yields over Brazilian semiarid. "Frontiers in Environmental Science", 7 Novembre 2017, vol. 5, núm. 73, p. 1-16.
URIhttp://hdl.handle.net/2117/110979
DOI10.3389/fenvs.2017.00073
ISSN2296-665X
Publisher versionhttps://www.frontiersin.org/articles/10.3389/fenvs.2017.00073/full
Collections
Share: