Improving the integration of task nesting and dependencies in OpenMP 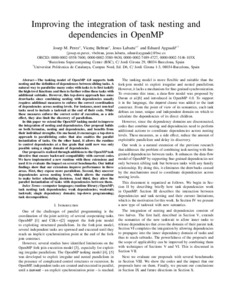 Document typeConference report
PublisherInstitute of Electrical and Electronics Engineers (IEEE)
Rights accessOpen Access
Abstract
The tasking model of OpenMP 4.0 supports both nesting and the definition of dependences between sibling tasks. A natural way to parallelize many codes with tasks is to first taskify the high-level functions and then to further refine these tasks with additional subtasks. However, this top-down approach has some drawbacks since combining nesting with dependencies usually requires additional measures to enforce the correct coordination of dependencies across nesting levels. For instance, most non-leaf tasks need to include a taskwait at the end of their code. While these measures enforce the correct order of execution, as a side effect, they also limit the discovery of parallelism. In this paper we extend the OpenMP tasking model to improve the integration of nesting and dependencies. Our proposal builds on both formulas, nesting and dependencies, and benefits from their individual strengths. On one hand, it encourages a top-down approach to parallelizing codes that also enables the parallel instantiation of tasks. On the other hand, it allows the runtime to control dependencies at a fine grain that until now was only possible using a single domain of dependencies. Our proposal is realized through additions to the OpenMP task directive that ensure backward compatibility with current codes. We have implemented a new runtime with these extensions and used it to evaluate the impact on several benchmarks. Our initial findings show that our extensions improve performance in three areas. First, they expose more parallelism. Second, they uncover dependencies across nesting levels, which allows the runtime to make better scheduling decisions. And third, they allow the parallel instantiation of tasks with dependencies between them.
Description
© 2017 IEEE. Personal use of this material is permitted. Permission from IEEE must be obtained for all other uses, in any current or future media, including reprinting/republishing this material for advertising or promotional purposes,creating new collective works, for resale or redistribution to servers or lists, or reuse of any copyrighted component of this work in other works
CitationPérez, J., Beltran, V., Labarta, J., Ayguade, E. Improving the integration of task nesting and dependencies in OpenMP. A: IEEE International Parallel and Distributed Processing Symposium. "2017 IEEE 31st International Parallel and Distributed Processing Symposium: 29 May–2 June 2017, Orlando, Florida: proceedings". Orlando, Florida: Institute of Electrical and Electronics Engineers (IEEE), 2017, p. 809-818.
URIhttp://hdl.handle.net/2117/110926
DOI10.1109/IPDPS.2017.69
ISBN978-1-5386-3914-6
Publisher versionhttp://ieeexplore.ieee.org/document/7967171/
Collections
Share: