Comparison between nonlinear measurements in patterned and unpatterned thin films 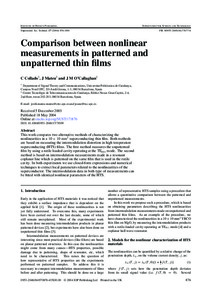 Document typeArticle
PublisherIOP PUBLISHING LTD
Rights accessOpen Access
Abstract
This work compares two alternative methods of characterizing the nonlinearities in a 10 × 10 mm2 superconducting thin film. Both methods are based on measuring the intermodulation distortion in high temperature superconducting (HTS) films. The first method measures the unpatterned film by using a rutile loaded cavity operating at the TE011 mode. The second method is based on intermodulation measurements made in a resonant coplanar line which is patterned on the same film that is used in the rutile cavity. In both experiments we use closed-form expressions and numerical techniques to extract local parameters related to the nonlinearities of the superconductor. The intermodulation data in both type of measurements can be fitted with identical nonlinear parameters of the HTS.
CitationCollado, C.; Mateu, J.; O'Callaghan, J. Comparison between nonlinear measurements in patterned and unpatterned thin films. Superconductor science & technology, 2004, vol.17, núm. 7, p. 876-880.
URIhttp://hdl.handle.net/2117/1109
ISSN0953-2048
Collections
Share: