Methodology for the detection of residential vulnerable areas: the case of Barcelona 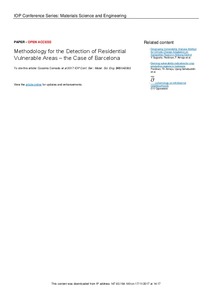 Document typeArticle
PublisherInstitute of Physics (IOP)
Rights accessOpen Access
Abstract
In a context of a shifting environmental, economic and social paradigm, European cities face a situation that is at the same time challenge and opportunity: the need for urban rehabilitation of the vulnerable degraded socio residential fabric. Public administrations in big cities and metropolitan areas are confronted with both the undercurrent need of actualization of the built stock and the rise of urban residential vulnerability. The city of Barcelona, as many others, is the result of multiple phenomena with high urban and social consequences. The socio spatial integration of immigrant population, the touristic rise and gentrification processes are current situations simultaneously taking place in the city. In parallel, a framework of economic crisis in which public investments in urban and social matters decrease, provides a temporal juncture that results into an increase of social polarization and socio economic inequality that becomes evident and expressed in the territory. This research focuses in the case of Barcelona, and presents a methodology based on a system of indicators elaborated through the exploitation of statistical data complemented with very specific data supplied by the Barcelona City Council. The accurate knowledge of socio demographic, socioeconomic and residential and urban characteristics is crucial in order to define the very complex urban dynamics that describe in the city neighbourhoods and areas. Residential vulnerability is defined as an assembly of objective conditions that relate to residential space and indicate situations of social discrimination and structural disadvantage of the population, related to a specific time and context. Thus, it is relevant to analyse the concentration of certain indicators of vulnerability in specific places or neighbourhoods, to contrast its effect on the socio-residential situation and its temporal evolution in order to identify tendencies. The present study contributes to the identification of data sources and a system to calculate the purposed indicators, the elaboration of a GIS analysis in order to determine the characterization of neighbourhoods and census sections according to each indicator, and the identification of areas with a higher degree of problematic based on synthetic analysis. A very relevant knowledge basis that can be used by public policy makers in order to establish measures that define vulnerable areas where to carry out actions that foster urban equality.
CitationCornado, C., Garcia-Almirall, Pilar, Vima-Grau, S., Vilà, G., Uzqueda, A.L. Methodology for the detection of residential vulnerable areas: the case of Barcelona. "IOP Conference Series: Materials Science and Engineering (Online)", 2017, núm. 245, p. 1-11.
URIhttp://hdl.handle.net/2117/110869
DOI10.1088/1757-899X/245/4/042062
ISSN1757-899X
Publisher versionhttp://iopscience.iop.org/article/10.1088/1757-899X/245/4/042062/pdf
Collections
Share: