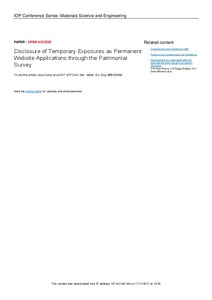 Document typeArticle
PublisherInstitute of Physics (IOP)
Rights accessOpen Access
Abstract
In a context of web application in the field of the dissemination of cultural heritage, this article advances in a methodology for the optimization of points clouds obtained through the technology of Laser Scanner (TLS). Identifying the potential of TLS surveys as interactive models that allow the cultural heritage to be perpetuated over time. This point cloud optimization is developed with free software, focusing its exploitation on an interactive web application, which has made it possible to convert two temporary museum exhibitions into permanent exhibitions in virtual format. Developed in conjunction with the Museu d’Història de la Ciutat de Barcelona. The case study focuses on the Palau Reial Major, Gothic style, formed by the chapel of Santa Àgata (built in 1302, on the Roman wall) and Saló del Tinell (built between 1359 and 1370, on the Roman remains). Located in the Plaça del Rei, in the old town of Barcelona. In this application is very important the visual impact, it requires to represent a faithful model of the interior of the building, from the point of view of color and lighting, avoiding the transparencies of the model through a dense cloud of dots, without occlusions, this requires a great quantity of positions. This implies a clear methodology, using different techniques such as photographic proyection, given the complexity of lighting of the building, as much for the artificial lighting as for the lighting of the stained glass. In this process, there were 84 positions that provide greater density of points, which are optimized with free programs. The temporary exhibitions of the case studies, elaborated by the MUHBA in the Saló del Tinell are:
Location
1: Plaça del Rei, 11, 08002 Barcelona, Espanya
CitationCorso, J.M., Garcia-Almirall, Pilar, Lopez, D., Casals, J. Disclosure of temporary exposures as permanent website applications through the patrimonial survey. "IOP Conference Series: Materials Science and Engineering (Online)", 2017, núm. 245, p. 1-11.
URIhttp://hdl.handle.net/2117/110862
DOI10.1088/1757-899X/245/5/052092
ISSN1757-899X
Publisher versionhttp://iopscience.iop.org/article/10.1088/1757-899X/245/5/052092/pdf
Collections
Share: