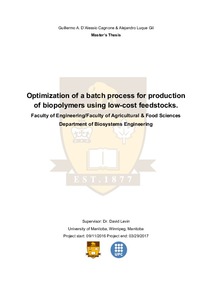 estudiant.upc.edu
Tutor / director / evaluatorLevin, David
Document typeMaster thesis
Rights accessOpen Access
Abstract
During the last century, the preoccupation concerning the environment has increased. This fact is due to the high consumption of products from non-renewables sources which processing, seriously damages the ecosystem. One of the most important non-renewables sources nowadays remains petroleum. Petroleum is used, mostly, as a raw material for obtaining energy. According to the International Energy Agency, in 2013 the world consumption of energy was 1,894.28 kg of oil equivalent per capita and more than 80% came from fossil fuel sources. For this reason, one of the main aims of the technology is trying to reduce its consumption in, inter alia, the production of petroleum derivatives. One important application of petroleum derivates are polymers. Since its invention at the ending of the 19th century, plastics have become very important in our lives. This material has become a focal component in most of the day-to-day activities. From phones to prosthesis, plastic is in our lives due to its properties and easy manufacturing. However, its production can be carried out through other more environmentally sustainable processes. In 1925, the microbiologist Maurice Lemoigne discovered the first polyhydroxyalkanoate (PHA) which years after will be used for the manufacturing of biodegradable plastics. The discovery of the so-called bioplastics was a hope to reduce the consumption of plastics that come from petroleum. The most important property of bioplastics is its capability for being 100% degradable and recyclable, not only by chemicals but also by microorganisms as bacteria. These plastics can be produced by different species of bacteria. One of the most employed is Pseudomonas putida which will be characterized later in this thesis. To obtain a high performance in the production of bioplastics there are different factors to consider: from the nutrient-limitation during the growth of bacteria to the extraction process. In spite of the advantages of bioplastics compared to conventional plastics, there is still a limiting factor that slows its manufacturing: the high cost of production. Although increasingly closer to its value, bioplastics should be economized even more to be able to compete with the other plastics. Due to all these facts, this thesis tries to find an optimal way to produce PHA from Pseudomonas putida using a low-cost feedstock, acidified Canola fatty acids. PHA production in bioreactors obtained the maximum amount of 12.75% in 2.00 g/L of CDW. The production in flasks was significantly higher arriving to values as high as 30.97%.
SubjectsMaterials, Materials
URIhttp://hdl.handle.net/2117/110846
Collections
Share: