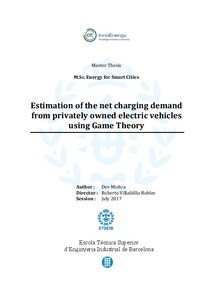 Except where otherwise noted, content on this work is licensed under a Creative Commons license : Attribution-NonCommercial-NoDerivs 3.0 Spain
Abstract
Electric vehicles are growing at a significant rate in the world and that makes it essential for modern day electricity networks to be prepared for their integration. A common approach of preparing the network for any kind of demand is to be able to predict or estimate the same based on data and simulations using optimization techniques. This work was aimed at the same in two distinct parts. In the first part, game theoretic methods were tried to be applied to an existing multi agent probabilistic model estimating net demand from electric vehicle. Owing to the complexity of the undertaking, it was decided to only include a payoff based allocation of electric vehicle charging scenarios to estimate electric vehicle demand which accounted for all scenarios rather than all vehicles charging in a single scenario. In the second part, a smaller scenario of an affluent household with two electric vehicles and typical mobility pattern was formulated. Game theory solution concept of Nash Equilibrium was used to optimize the charging of both electric vehicles over a week of usage. The results from the first part, displayed an overall reduction in maximum loads while there were certain shifts in loads observed as well. As an exercise without any inherent optimization mechanism the overall results from this segment were inconclusive. The results from the second part, demonstrated needs for charging the EVs shifting to offpeak hours and charging of vehicles, a maximum of 1-2 times per week based on user range anxiety, game theoretic competition and mobility needs. Further, savings from charging at off-peak tariffs based on time of use electricity tariffs were also evaluated.
SubjectsElectric vehicles -- Power supply, Electric vehicles -- Batteries, Game theory, Vehicles elèctrics -- Fonts d'alimentació, Vehicles elèctrics -- Bateries, Jocs, Teoria de
DegreeMÀSTER UNIVERSITARI EN ENGINYERIA DE L'ENERGIA (Pla 2013)
URIhttp://hdl.handle.net/2117/110800
Collections
Share: