Characterization of the Spanish Electricty Sector 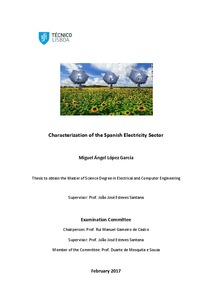 In a context of decarbonisation of the economy, the objective of this work is to analyze and to know the current Spanish electricity system, the expected future trends and to conclude if this system is adequate and sustainable both today and in the medium-long term. To do this, we have first collected data on energy contributed to the mix and installed capacity in 2015, as well as the available power in the peaks demand of each technology in recent years. Once exposed the composition of the electricity system with its activities regulated and released, have been presented the challenges currently facing the Spanish and European energy markets, in terms of amortization problems of the new facilities and the risk this entails future investments. Based on the above, and taking into account the European guidelines and the state of the art of technologies: it is done an analysis of the Spanish electrical situation, the future prospects and the challenges to be faced. The study concludes by noting that although there are no electricity supply problems today, there could be problems in the medium term, since market prices will not be able to cover the costs of future facilities, leading to investors flee to other sectors, lack of competitiveness and lack of despatchable technology in the system. It is vitally important to carry out an audit of the electrical system to determine the real costs. Both windfall profits and windfall losses would be avoided, tending to balance the system.
SubjectsEnergy, Energia
URIhttp://hdl.handle.net/2117/110791