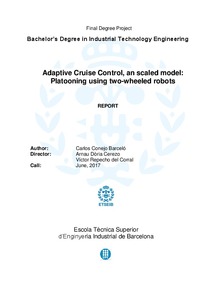 Document typeBachelor thesis
Rights accessOpen Access
Abstract
The aim of the project is to recreate, in a small-scale, the interaction between vehicles that circulate in the same path. Several technological options like Adaptive Cruise Control or Cooperative Adaptive Cruise Control are studied and compared to allow a safety circulation, avoiding accidents between vehicles or between vehicles and pedestrians. This Final Degree Project is formed by three differentiated parts. The first task consists on triplicating a two-wheel robot, which was made by Bachelor’s Degree students one year ago, to have four equal vehicles. The second step is to study the behaviour of the different robots and its sensors, and try to make a statistical study to reduce these possible deviations unifying the code that vehicles rule. Finally, the last part and the principal one, consists on programming a platooning position control and the connection between the different vehicles and the computer.
SubjectsAutomobiles -- Speed -- Automatic control, Mobile robots, Automòbils -- Velocitat -- Control automàtic, Robots mòbils
DegreeGRAU EN ENGINYERIA EN TECNOLOGIES INDUSTRIALS (Pla 2010)
URIhttp://hdl.handle.net/2117/110624
Collections
Share: