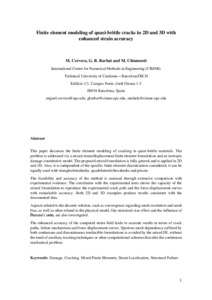 Document typeArticle
Rights accessOpen Access
All rights reserved. This work is protected by the corresponding intellectual and industrial property rights. Without prejudice to any existing legal exemptions, reproduction, distribution, public communication or transformation of this work are prohibited without permission of the copyright holder
Abstract
This paper discusses the finite element modeling of cracking in quasi-brittle materials. The problem is addressed via a mixed strain/displacement finite element formulation and an isotropic damage constitutive model. The proposed mixed formulation is fully general and is applied in 2D and 3D. Also, it is independent of the specific finite element discretization considered; it can be equally used with triangles/tetrahedra, quadrilaterals/hexahedra and prisms. The feasibility and accuracy of the method is assessed through extensive comparison with experimental evidence. The correlation with the experimental tests shows the capacity of the mixed formulation to reproduce the experimental crack path and the force–displacement curves with remarkable accuracy. Both 2D and 3D examples produce results consistent with the documented data. Aspects related to the discrete solution, such as convergence regarding mesh resolution and mesh bias, as well as other related to the physical model, like structural size effect and the influence of Poisson’s ratio, are also investigated. The enhanced accuracy of the computed strain field leads to accurate results in terms of crack paths, failure mechanisms and force displacement curves. Spurious mesh dependency suffered by both continuous and discontinuous irreducible formulations is avoided by the mixed FE, without the need of auxiliary tracking techniques or other computational schemes that alter the continuum mechanical problem.
Description
The final publication is available at Springer via http://dx.doi.org/10.1007/s00466-017-1438-8
CitationCervera, M., Barbat, G., Chiumenti, M. Finite element modeling of quasi-brittle cracks in 2D and 3D with enhanced strain accuracy. "Computational mechanics", Novembre 2017, vol. 60, núm. 5, p. 767-796.
URIhttp://hdl.handle.net/2117/110585
DOI10.1007/s00466-017-1438-8
ISSN0178-7675
Publisher versionhttps://link.springer.com/article/10.1007%2Fs00466-017-1438-8
Collections
Share: