Speaker orientation estimation based on hybridation of GCC-PHAT and HLBR 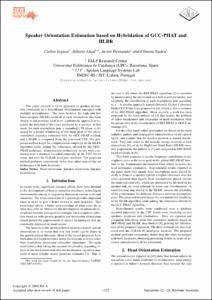 Document typeConference report
Rights accessOpen Access
All rights reserved. This work is protected by the corresponding intellectual and industrial property rights. Without prejudice to any existing legal exemptions, reproduction, distribution, public communication or transformation of this work are prohibited without permission of the copyright holder
Abstract
This paper presents a novel approach to speaker orientation estimation in a SmartRoom environment equipped with multiple microphones. The ratio between the high and low band energies (HLBR) received at each microphone has been shown in our previous work to be a potentially approach to estimate the direction of the voice produced by a speaker. In this work, for each microphone pair, a smoothed CPS phase is obtained by a proper windowing of the main peak of the crosscorrelation sequence estimated with the GCC-PHAT method, and a HLBR is computed from the processed CPS. The proposed method keeps the computational simplicity of the HLBR algorithm while adding the robustness offered by the GCCPHAT technique. Experimental preliminary results were conducted over a database recorded purposely in the UPC Smart room, and over the CLEAR head pose database. The proposed method performs consistently better than other state-of-the-art techniques with both databases.
CitationSegura, C. [et al.]. Speaker orientation estimation based on hybridation of GCC-PHAT and HLBR. A: International Speech Communication Association. Conference. "9TH ANNUAL CONFERENCE OF THE INTERNATIONAL SPEECH COMMUNICATION ASSOCIATION". Brisbane: 2008, p. 1325-1328.
URIhttp://hdl.handle.net/2117/11030
ISBN978-1-61567-378-0
Publisher versionhttp://www.lsi.upc.edu/~nlp/papers/hernando_orient.pdf
Collections
Share: