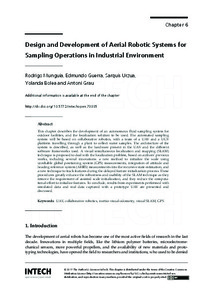 This chapter describes the development of an autonomous fluid sampling system for outdoor facilities, and the localization solution to be used. The automated sampling system will be based on collaborative robotics, with a team of a UAV and a UGV platform travelling through a plant to collect water samples. The architecture of the system is described, as well as the hardware present in the UAV and the different software frameworks used. A visual simultaneous localization and mapping (SLAM) technique is proposed to deal with the localization problem, based on authors’ previous works, including several innovations: a new method to initialize the scale using unreliable global positioning system (GPS) measurements, integration of attitude and heading reference system (AHRS) measurements into the recursive state estimation, and a new technique to track features during the delayed feature initialization process. These procedures greatly enhance the robustness and usability of the SLAM technique as they remove the requirement of assisted scale initialization, and they reduce the computational effort to initialize features. To conclude, results from experiments performed with simulated data and real data captured with a prototype UAV are presented and discussed.
CitationMunguia, R.F., Guerra, E., Urzua, S., Bolea, Y., Grau, A. Design and development of aerial robotic systems for sampling operations in industrial environment. A: "Aerial robots: aerodynamics, control and applications". Rijeka: InTech, 2017, p. 123-143.
URIhttp://hdl.handle.net/2117/110256
DOI10.5772/intechopen.70005
ISBN978-953-51-3464-0
Publisher versionhttps://www.intechopen.com/books/aerial-robots-aerodynamics-control-and-applications/design-and-development-of-aerial-robotic-systems-for-sampling-operations-in-industrial-environment