HetFS: A heterogeneous file system for everyone 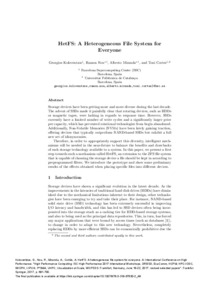 Document typeConference report
PublisherSpringer
Rights accessOpen Access
European Commission's projectBigStorage - BigStorage: Storage-based Convergence between HPC and Cloud to handle Big Data (EC-H2020-642963)
Abstract
Storage devices have been getting more and more diverse during the last decade. The advent of SSDs made it painfully clear that rotating devices, such as HDDs or magnetic tapes, were lacking in regards to response time. However, SSDs currently have a limited number of write cycles and a significantly larger price per capacity, which has prevented rotational technologies from begin abandoned. Additionally, Non-Volatile Memories (NVMs) have been lately gaining traction, offering devices that typically outperform NAND-based SSDs but exhibit a full new set of idiosyncrasies. Therefore, in order to appropriately support this diversity, intelligent mechanisms will be needed in the near-future to balance the benefits and drawbacks of each storage technology available to a system. In this paper, we present a first step towards such a mechanism called HetFS, an extension to the ZFS file system that is capable of choosing the storage device a file should be kept in according to preprogrammed filters. We introduce the prototype and show some preliminary results of the effects obtained when placing specific files into different devices.
CitationKoloventzos, G., Nou, R., Miranda, A., Cortés, A. HetFS: A heterogeneous file system for everyone. A: International Conference on High Performance. "High Performance Computing: ISC High Performance 2017 International Workshops, DRBSD, ExaComm, HCPM, HPC-IODC, IWOPH, IXPUG, P^3MA, VHPC, Visualization at Scale, WOPSSS: Frankfurt, Germany, June 18-22, 2017: revised selected papers". Frankfur: Springer, 2017, p. 691-700.
URIhttp://hdl.handle.net/2117/110254
DOI10.1007/978-3-319-67630-2_49
ISBN978-3-319-67630-2
Publisher versionhttps://link.springer.com/chapter/10.1007/978-3-319-67630-2_49
Collections
Share: