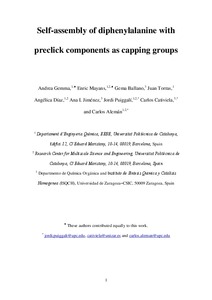 Document typeArticle
Rights accessOpen Access
Abstract
Alkyne and azide, which are commonly used in the cycloaddition reaction recognized as “click chemistry”, have been used as capping groups of two engineered diphenylalanine (FF) derivatives due to their ability to form weak intermolecular interactions (i.e. dipole–π and π–π stacking). In Poc-FF-N3, alkyne and azide act as N- and C-terminal capping groups, respectively, while such positions are exchanged in N3-FF-OPrp. The self-assembly of such two synthesized peptides has been extensively studied in their “pre-click” state, considering the influence of three different factors: the peptide concentration, the polarity of the medium, and the nature of the substrate. Poc-FF-N3 assembles into microfibers that, depending on the medium and the substrate, can aggregate hierarchically in supramolecular structures with different morphologies. The most distinctive one corresponds to very stable birefringent dendritic-like microstructures, which are derived from the ordered agglomeration of microfibers. These branched supramolecular structures, which are observed under a variety of conditions, are relatively uncommon in short FF sequences. At the molecular level, Poc-FF-N3 organizes in antiparallel β-sheets stabilized by N–H⋯O intermolecular hydrogen bonds and re-enforced by weak interactions between the azide and alkyne groups of neighbouring molecules. In contrast, N3-FF-OPrp exhibits a very poor tendency to organize into structures with a well-defined morphology. Theoretical calculations on model complexes indicate that the tendency of the latter peptide to organize into small amorphous agglomerates is due to its poor ability to form specific intermolecular interactions in comparison with Poc-FF-N3. The implications of the weak interactions induced by the alkyne and azide groups, which strengthen peptide⋯peptide hydrogen bonds and π-ladders due to the stacked aromatic phenyl side groups, are discussed.
CitationGemma, A., Mayans, E., Ballano, G., Torras, J., Diaz, A., Jimenez, A., Puiggali, J., Cativiela Marín, Carlos A., Aleman, C. Self-assembly of diphenylalanine with preclick components as capping groups. "Physical chemistry chemical physics", 1 Gener 2017, vol. 39, p. 1-14.
URIhttp://hdl.handle.net/2117/110216
DOI10.1039/c7cp03792a
ISSN1463-9076
Publisher versionhttp://pubs.rsc.org/en/Content/ArticleLanding/2017/CP/C7CP03792A#!divAbstract
Collections
Share: