With evolution for revolution: managing FEDERICA for future Internet research 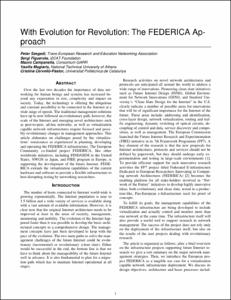 Document typeArticle
Rights accessOpen Access
Abstract
Over the last two decades the importance of data networking for human beings and systems has increased beyond any expectation in size, complexity, and impact on society. Today, technology offers the ubiquitous and constant possibility of being connected to the Internet at a wide range of speeds. Traditional management solutions have up to now followed an evolutionary path, although the scale of the Internet and emerging novel architectures such as peer-to-peer, ad hoc networks, as well as virtualization-capable network infrastructures require focused and possibly revolutionary changes in management approaches. This article elaborates on challenges posed by the renaissance of virtualization as experienced in the planning, development, and operation of the FEDERICA infrastructure. The European Community cofunded project FEDERICA, like other worldwide initiatives such as FIND/GENI in the United States, NWGN in Japan, and the FIRE program in Europe, is supporting the development of the future Internet. FEDERICA extends the virtualization capabilities of the current hardware and software to provide a flexible infrastructure to host disruptive testing by networking researchers.
CitationSzegedi, P. [et al.]. With evolution for revolution: managing FEDERICA for future Internet research. "IEEE communications magazine", Juliol 2009, vol. 47, núm. 7, p. 34-39.
URIhttp://hdl.handle.net/2117/11021
DOI10.1109/MCOM.2009.5183470
ISSN0163-6804
Collections
Share: