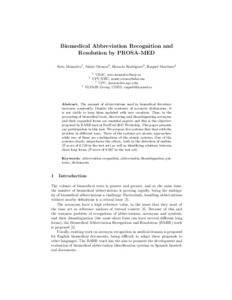 Martínez, Raquel
Document typeConference report
PublisherCEUR-WS.org
Rights accessOpen Access
Abstract
The amount of abbreviations used in biomedical literature increases constantly. Despite the existence of acronym dictionaries, it is not viable to keep them updated with new creations. Thus, in the processing of biomedical texts, discovering and disambiguating acronyms and their expanded forms are essential aspects and this is the objective proposed by BARR task at IberEval 2017 Workshop. This paper presents our participation in this task. We propose five systems that deal with the problem in different ways. Three of the systems are atomic approaches, while two of them are combinations of the atomic systems. One of the systems clearly outperforms the others, both in the detection of entities (F-score of 0.749 in the test set) as well as identifying relations between short-long forms (F-score of 0.697 in the test set).
CitationMontalvo, S., Oronoz, M., Rodríguez, H., Martínez, R. Biomedical abbreviation recognition and resolution by PROSA-MED. A: Workshop on Evaluation of Human Language Technologies for Iberian Languages. "Proceedings of the Second Workshop on Evaluation of Human Language Technologies for Iberian Languages (IberEval 2017) co-located with 33th Conference of the Spanish Society for Natural Language Processing (SEPLN 2017): Murcia, Spain, September 19, 2017". Murcia: CEUR-WS.org, 2017, p. 247-254.
URIhttp://hdl.handle.net/2117/110182
ISBN1613-0073
Publisher versionhttp://ceur-ws.org/Vol-1881/BARR2017_paper_1.pdf
Collections
Share: