Test and measurement under SDR framework 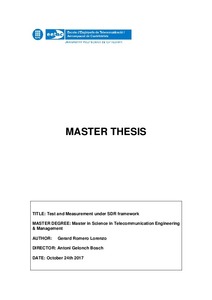 Document typeMaster thesis
Rights accessOpen Access
Abstract
In times when telecommunications are one of the cardinal points of our society, engineers people who study them are very important to be able to see and analyse the signals which make up them. That is why experts, in this broad field, need a tool capable of providing a vision of all the signals which they are sending or receiving. In this project, we tried to implement a graphical interface tool able to give visibility to all the signals received by any telecommunication device. Making the user itself able to interact with it, in such a way he has the absolute control of what he wants to do. In addition, this tool is designed to support all those users who use a framework based on Software Defined Radio. In this project, first, it will be explained what is exactly the Software Defined Radio technology, including its benefits and giving examples of application where it is used. Also, there is a collection of frameworks that are based on this technology, explaining in more detail ALOE Middleware. Next, we will try to explain in detail how the software is built, what is the data flow, the graphs in which it is composed and the functionality they have. And finally, the entire implementation will be incorporated into the Software Defined Radio technology, especially, within the ALOE middleware where real-time tests will be sent by sending audio signals and LTE signals.
SubjectsSignal processing--Digital techniques, Digital audio broadcasting, Tractament del senyal -- Tècniques digitals, Radiodifusió digital
DegreeMÀSTER UNIVERSITARI EN APLICACIONS I GESTIÓ DE L'ENGINYERIA DE TELECOMUNICACIÓ (MASTEAM) (Pla 2015)
URIhttp://hdl.handle.net/2117/110169
Collections
Share: