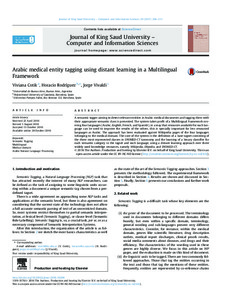 A semantic tagger aiming to detect relevant entities in Arabic medical documents and tagging them with their appropriate semantic class is presented. The system takes profit of a Multilingual Framework covering four languages (Arabic, English, French, and Spanish), in a way that resources available for each language can be used to improve the results of the others, this is specially important for less resourced languages as Arabic. The approach has been evaluated against Wikipedia pages of the four languages belonging to the medical domain. The core of the system is the definition of a base tagset consisting of the three most represented classes in SNOMED-CT taxonomy and the learning of a binary classifier for each semantic category in the tagset and each language, using a distant learning approach over three widely used knowledge resources, namely Wikipedia, Dbpedia, and SNOMED-CT.
CitationCotik, V., Rodríguez, H., Vivaldi, J. Arabic medical entity tagging using distant learning in a multilingual framework. "Journal of King Saud University-Computer and Information Sciences", 30 Abril 2017, vol. 29, núm. 2, p. 204-211.
URIhttp://hdl.handle.net/2117/110166
DOI10.1016/j.jksuci.2016.10.004
ISSN1319-1578
Publisher versionhttp://www.sciencedirect.com/science/article/pii/S1319157816300854