Dessign of an RNP point merge approach at Barcelona Airport 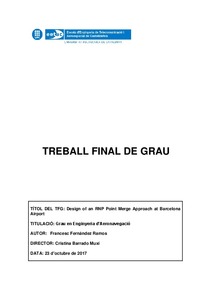 Except where otherwise noted, content on this work is licensed under a Creative Commons license : Attribution-NonCommercial-ShareAlike 3.0 Spain
Abstract
This document consists on the design of a new RNP arrival procedure at Barcelona - El Prat airport for noise reduction purposes. It is divided in four different parts. First of all it is studied all available technologies and systems that would be possible to implement, analyzing pros and cons of each one, creating the general design criteria for the proposal. Airspace surrounding the airport and the expected impact generated is also discussed in this first block. After the first stage is completed, three initial arrival procedure proposals are studied following the results from the first block. At the third block simulations are performed. Starting from the initial 3 proposals, a basic and initial simulation evaluates their feasibility and helps detecting possible operability problems. From this first simulation, a final option is chosen and improved to be tested in a final simulation session with a real Air Traffic Controller. Finally, in the fourth block it is studied the impact for the final proposal, presenting all simulations' data and results. For the simulations, both initial and final, Euroscope software was used. It allowed running simulation sessions with more than one ATCo and pseudopilot positions, saving all the data for the afterwards analysis. After obtaining simulations' results, all benefits from an application of a Point Merge System are confirmed, resulting in a validation of the initial objective of reducing environmental impact due to airport's operations.
SubjectsNavigation (Aeronautics), Navegació aèria
DegreeGRAU EN ENGINYERIA D'AERONAVEGACIÓ (Pla 2010)
Location
1: Aeroport de Barcelona-El Prat (BCN), 08820 El Prat de Llobregat, Barcelona, Espanya
URIhttp://hdl.handle.net/2117/110165
Collections
Share: