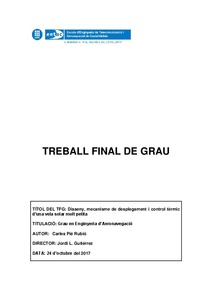 This document contains the design of a solar sail. Three main parts will be studied in this project: structural design, thermal design and deployment . The first one will be based in studying the different materials that can be used nowadays to build a solar sail, they will be compared and finally, one will be chosen. The loads on the sail will be also evaluated and the place of all the components too ; the components that will be on the film and the ones that will be placed on the main structure, always taking into account the different interactions that will exist between them and the assembly requirements. The second one will study the thermal equili brium. This equilibrium is based on computing not only the temperature reached on the film, also th e temperature reached at all those components exposed to the Sun. Once the result will be found, some changes will be done in order to accomplish the functio nal requirements listed by the mentioned components. On the other hand, the different types of deployment will be evaluated an compared. Finally one of them will be selected according to the characteristics that our project needs. At the same time, this deployment mechanism will add more components that will be studied in the first chapter. The final result will be a solar sail that, even though the efforts made to reduce the global mass, is heavier than 100 grams so, the conclusion will be that nowadays it is impossible to build this kind of spacecraft. However, the possibility of a solar sail completely func t ional , spending long time periods in mission (analyzing the magnetic camp) will be ratified . The project will end with a built and deployed sola r sail which will be composed for a thin film of Mylar (at 44ºC) with two coatings; one of aluminum and the other of chromium. The deployment system that is going to be chosen is the one that uses the inertia of the Booms to deploy the sail, avoiding any k ind of extreme loads
SubjectsSolar energy, Propulsion systems, Artificial satellites, Energia solar, Sistemes de propulsió, Satèl·lits artificials
URIhttp://hdl.handle.net/2117/110163