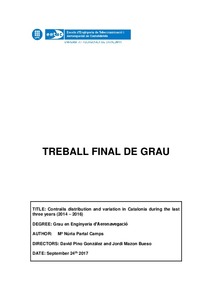 Since the industrial revolution human activities have modified the climate and the weather; for instance, creating the heat island effect due to urbanization, or increasing cloud cover. Particularly, exhausts for airplanes have increased the cloud cover, especially in the Northern Hemisphere where the majority of commercial aviation occurs. Depending on the atmospheric conditions at cruise level, emissions from airplanes can condensate and/or depose producing clouds, which can stay for several hours. These clouds are called contrails. Following Mazon et al (2012) the Catalan Meteorological Service, included in their regular observations during the last three years the appearance of anthropoclouds (clouds produced by human activities). These observations are the first attempt of having a direct quantification of the influence of aviation on cloud cover in Catalonia without using models or satellite observations. The goal of the project is to quantify the percentage of anthropoclouds over the total cloud cover and to infer any evolution based on air traffic management. Additionally, contrail observations will be related to weather conditions in the upper and middle to troposphere to study which synoptic conditions favor the appearance of contrails in Catalonia, in order to investigate whether contrail's formation and evolution can be forecasted.
SubjectsClouds, Núvols
URIhttp://hdl.handle.net/2117/110159