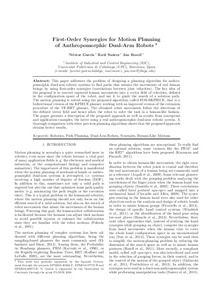 Document typeArticle
Rights accessOpen Access
ProjectUnCoVerCPS - Unifying Control and Verification of Cyber-Physical Systems (EC-H2020-643921)
Abstract
This paper addresses the problem of designing a planning algorithm for anthropomorphic dual-arm robotic systems to find paths that mimics the movements of real human beings by using first-order synergies (correlations between joint velocities). The key idea of the proposal is to convert captured human movements into a vector field of velocities, defined in the configuration space of the robot, and use it to guide the search of a solution path. The motion planning is solved using the proposed algorithm, called FOS-BKPIECE, that is a bidirectional version of the KPIECE planner working with an improved version of the extension procedure of the VF-RRT planner. The obtained robot movements follow the directions of the defined vector field and hence allow the robot to solve the task in a human-like fashion. The paper presents a description of the proposed approach as well as results from conceptual and application examples, the latter using a real anthropomorphic dual-arm robotic system. A thorough comparison with other previous planning algorithms shows that the proposed approach obtains better results.
CitationGarcia, N., Suarez, R., Rosell, J. First-order synergies for motion planning of anthropomorphic dual-arm robots. "IFAC-PapersOnLine", 1 Juliol 2017, vol. 50, núm. 1, p. 2247-2254.
URIhttp://hdl.handle.net/2117/110127
DOI10.1016/j.ifacol.2017.08.187
ISSN2405-8963
Publisher versionhttp://www.sciencedirect.com/science/article/pii/S2405896317303348?via%3Dihub
Collections
Share: