A study of packet losses in the EuQoS network 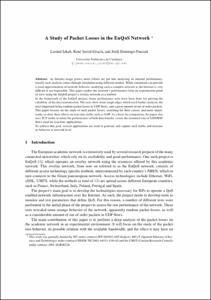 Document typeConference report
Rights accessOpen Access
All rights reserved. This work is protected by the corresponding intellectual and industrial property rights. Without prejudice to any existing legal exemptions, reproduction, distribution, public communication or transformation of this work are prohibited without permission of the copyright holder
Abstract
As Internet usage grows, more efforts are put into analyzing its internal performance, usually such analysis comes through simulation using different models. While simulation can provide a good approximation of network behavior, modeling such a complex network as the Internet is very difficult if not impossible. This paper studies the network’s performance from an experimental point of view using the EuQoS project’s overlay network as a testbed. In the framework of the EuQoS project, many performance tests have been done for proving the reliability of the data transmission. The tests show some rough edges which need further analysis, the most important being random packet losses in UDP flows, and a great amount of out of order packets. This paper focuses on the study of such packet losses, searching for their causes, and more importantly, to show their effects on real-time traffic such as VoIP. As a basis for comparison, the paper also uses TCP traffic to relate the performance of bulk data transfer versus the sustained rate of UDP/RTP flows used for real-time applications. To achieve this goal, several applications are used to generate and capture such traffic and measure its behavior at network level.
CitationJakab, L.; Serral, R.; Domingo, J. A study of packet losses in the EuQoS network. A: International Workshop on Internet Performance, Simulation, Monitoring and Measurements. "4th International Workshop on Internet Performance, Simulation, Monitoring and Measurements. IPS-MoMe 2006". 2006, p. 1-9.
URIhttp://hdl.handle.net/2117/11011
Publisher versionhttp://www.ips2006.org/index.php?option=com_content&task=view&id=10&Itemid=24
Collections
Share: