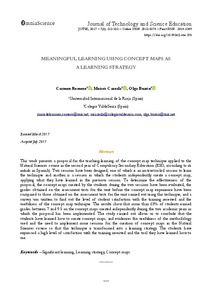 Show full item record
Romero García, Carmen
Cazorla, Moisés
Buzón García, Olga
Document typeArticle
PublisherOmniaScience
Rights accessOpen Access
Abstract
This work presents a proposal for the teaching-learning of the concept map technique applied to the Natural Sciences course in the second year of Compulsory Secondary Education (ESO, according to its initials in Spanish). Two sessions have been designed, one of which is an instructor-led session to learn the technique and another is a session in which the students independently create a concept map, applying what they have learned in the previous session. To determine the effectiveness of the proposal, the concept maps created by the students during the two sessions have been evaluated, the grades obtained on the assessment tests for the unit before the concept map experience have been compared to those obtained on the assessment tests for the unit carried out using this technique, and a survey was written to find out the level of student satisfaction with the training received and the usefulness of the concept map technique. The results show that more than 65% of students earned grades between 7 and 9.5 on the concept maps created independently during the two academic years in which the proposal has been implemented. The study carried out allows us to conclude that the students have learned how to create concept maps, and evidences the usefulness of the methodology used and the need to implement more sessions for the creation of concept maps in the Natural Sciences course so that this technique is transformed into a learning strategy. The students have expressed a high level of satisfaction with the training received and the tool they have learned how to use
CitationRomero García, C.; Cazorla, M.; Buzón García, O. Meaningful learning using concept maps as a learning strategy. "JOTSE: Journal of Technology and Science Education", Setembre 2017, vol. 7, núm. 3, p. 313-332.
URIhttp://hdl.handle.net/2117/110048
DLB-2000-2012
ISSN2013-6374
2014-5349
Collections
Share: