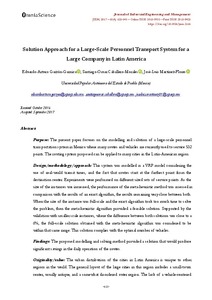 Except where otherwise noted, content on this work is licensed under a Creative Commons license : Attribution-NonCommercial 3.0 Spain
Abstract
Purpose: The present paper focuses on the modelling and solution of a large-scale personnel transportation system in Mexico where many routes and vehicles are currently used to service 532 points. The routing system proposed can be applied to many cities in the Latin-American region. Design/methodology/approach: This system was modelled as a VRP model considering the use of real-world transit times, and the fact that routes start at the farthest point from the destination center. Experiments were performed on different sized sets of service points. As the size of the instances was increased, the performance of the meta-heuristic method was assessed in comparison with the results of an exact algorithm, the results remaining very close between both. When the size of the instance was full-scale and the exact algorithm took too much time to solve the problem, then the meta-heuristic algorithm provided a feasible solution. Supported by the validation with smaller scale instances, where the difference between both solutions was close to a 6%, the full–scale solution obtained with the meta-heuristic algorithm was considered to be within that same range. This solution complies with the optimal number of vehicles. Findings: The proposed modelling and solving method provided a solution that would produce significant savings in the daily operation of the routes. Originality/value: The urban distribution of the cities in Latin America is unique to other regions in the world. The general layout of the large cities in this region includes a small-town center, usually antique, and a somewhat disordered outer region. The lack of a vehicle-centered
CitationGarzón Garnica, E. A.; Caballero Morales, S. O.; Martínez Flores, J. L. Solution Approach for a Large-Scale Personnel Transport System for a Large Company in Latin America. "Journal of Industrial Engineering and Management", Octubre 2017, vol. 10, núm. 4, p. 623-645.
URIhttp://hdl.handle.net/2117/110047
DOI10.3926/jiem.2116
DLB-28744-2008
ISSN2013-0953
Collections
Share: