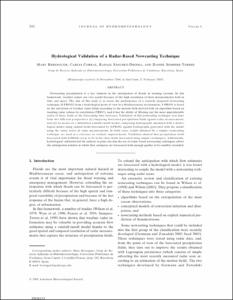 Document typeArticle
Rights accessOpen Access
Abstract
Nowcasting precipitation is a key element in the anticipation of floods in warning systems. In this framework, weather radars are very useful because of the high resolution of their measurements both in time and space. The aim of this study is to assess the performance of a recently proposed nowcasting technique (S-PROG) from a hydrological point of view in a Mediterranean environment. S-PROG is based on the advection of weather radar fields according to the motion field derived with an algorithm based on tracking radar echoes by correlation (TREC), and it has the ability of filtering out the most unpredictable scales of these fields as the forecasting time increases. Validation of this nowcasting technique was done from two different perspectives: (i) comparing forecasted precipitation fields against radar measurements, and (ii) by means of a distributed rainfall runoff model, comparing hydrographs simulated with a hydrological model using rainfall fields forecasted by S-PROG against hydrographs generated with the model using the entire series of radar measurements. In both cases, results obtained by a simpler nowcasting technique are used as a reference to evaluate improvements. Validation showed that precipitation fields forecasted with S-PROG seem to be better than fields forecasted using simpler techniques. Additionally, hydrological validation led the authors to point out that the use of radar-based nowcasting techniques allows the anticipation window in which flow estimates are forecasted with enough quality to be sensibly extended.
CitationBerenguer, M. [et al.]. Hydrological validation of a radar-based nowcasting technique. "Journal of hydrometeorology", Agost 2005, vol. 6, núm. 4, p. 532-549.
URIhttp://hdl.handle.net/2117/10997
DOI10.1175/JHM433.1
ISSN1525-755X
Publisher versionhttp://journals.ametsoc.org/doi/pdf/10.1175/JHM433.1
Collections
Share: