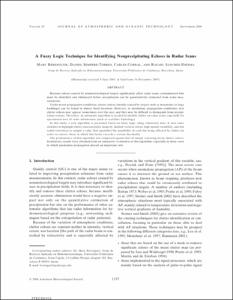 Sánchez-Diezma Guijarro, Rafael
Document typeArticle
PublisherAmerican Meteorological Society
Rights accessOpen Access
Abstract
Because echoes caused by nonmeteorological targets significantly affect radar scans, contaminated bins must be identified and eliminated before precipitation can be quantitatively estimated from radar measurements. Under mean propagation conditions, clutter echoes (mainly caused by targets such as mountains or large buildings) can be found in almost fixed locations. However, in anomalous propagation conditions, new clutter echoes may appear (sometimes over the sea), and they may be difficult to distinguish from precipitation returns. Therefore, an automatic algorithm is needed to identify clutter on radar scans, especially for operational uses of radar information (such as real-time hydrology). In this study, a new algorithm is presented based on fuzzy logic, using volumetric data. It uses some statistics to highlight clutter characteristics (namely, shallow vertical extent, high spatial variability, and low radial velocities) to output a value that quantifies the possibility of each bin being affected by clutter (in order to remove those in which this factor exceeds a certain threshold). The performance of this algorithm was compared against that of simply removing mean clutter echoes. Satisfactory results were obtained from an exhaustive evaluation of this algorithm, especially in those cases in which anomalous propagation played an important role.
CitationBerenguer, M. [et al.]. A fuzzy logic technique for identifying nonprecipitating echoes in radar scans. "Journal of atmospheric and oceanic technology", Setembre 2006, vol. 23, núm. 9, p. 1157-1180.
URIhttp://hdl.handle.net/2117/10996
DOI10.1175/JTECH1914.1
ISSN0739-0572
Publisher versionhttp://journals.ametsoc.org/doi/pdf/10.1175/JTECH1914.1
Collections
Share: