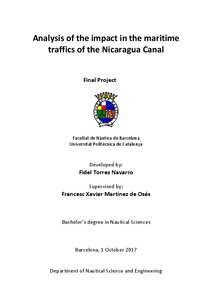 124933_Analysis of the impact in the maritime traffics of the Nicaragua canal.pdf (4,046Mb)
Share:

Document typeBachelor thesis
Rights accessOpen Access
Description
One of the primary causes for the increased traffic through the Panama Canal and the expansion of the US East coast ports has been the importing of Chinese manufactured products. The new canal will offer a shorter route between China and the US East coast and will compete with the current expanded Panama Canal. To analyze how the shipping routes would change, three scenarios have been studied, each one focused on a different aspect: economics, environment, and politics. For each one, similar conclusions have been extracted: the canal’s feasibility is in doubt, since it does not provide enough guarantees for its construction. Comparisons with different routes were made, including both Panama and Suez canals and the Magellan strait, in order to evaluate the different distances and transit times so to measure the impact of the Nicaragua Canal. The main objective of this project is to assess if the construction of the new canal is going to influence future shipping routes, and how.
SubjectsShipping, Shipping--Economic aspects., Nicaragua Canal (Nicaragua), Transport marítim, Nicaragua, Canal de
DegreeGRAU EN NÀUTICA I TRANSPORT MARÍTIM (Pla 2010)
Location
1: Departament de Río San Juan, Nicaragua
URIhttp://hdl.handle.net/2117/109831
Collections
Share: