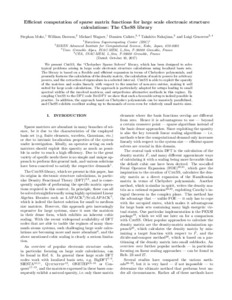 We present CheSS, the “Chebyshev Sparse Solvers” library, which has been designed to solve typical problems arising in large-scale electronic structure calculations using localized basis sets. The library is based on a flexible and efficient expansion in terms of Chebyshev polynomials and presently features the calculation of the density matrix, the calculation of matrix powers for arbitrary powers, and the extraction of eigenvalues in a selected interval. CheSS is able to exploit the sparsity of the matrices and scales linearly with respect to the number of nonzero entries, making it well-suited for large-scale calculations. The approach is particularly adapted for setups leading to small spectral widths of the involved matrices and outperforms alternative methods in this regime. By coupling CheSS to the DFT code BigDFT, we show that such a favorable setup is indeed possible in practice. In addition, the approach based on Chebyshev polynomials can be massively parallelized, and CheSS exhibits excellent scaling up to thousands of cores even for relatively small matrix sizes.
CitationMohr, S. [et al.]. Efficient Computation of Sparse Matrix Functions for Large-Scale Electronic Structure Calculations: The CheSS Library. "Journal of Chemical Theory and Computation", 5 Setembre 2017, vol. 13, núm. 10, p. 4684-4698.
URIhttp://hdl.handle.net/2117/109784
DOI10.1021/acs.jctc.7b00348
ISSN1549-9618
Publisher versionhttp://pubs.acs.org/doi/abs/10.1021/acs.jctc.7b00348