A phosphorous flow analysis in Spain 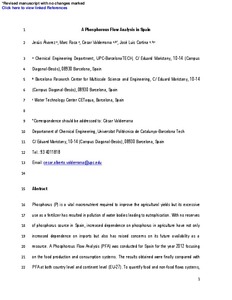 Document typeArticle
PublisherElsevier
Rights accessOpen Access
Abstract
Phosphorus (P) is a vital macronutrient required to improve the agricultural yields but its excessive use as a fertilizer has resulted in pollution of water bodies leading to eutrophication. With no reserves of phosphorus source in Spain, increased dependence on phosphorus in agriculture have not only increased dependence on imports but also has raised concerns on its future availability as a resource. A Phosphorous Flow Analysis (PFA) was conducted for Spain for the year 2012 focusing on the food production and consumption systems. The results obtained were finally compared with PFA at both country level and continent level (EU-27). To quantify food and non-food flows systems, country specific data were considered. The sectors covered were crop production (CP), animal production (AP), food processing (FP), non-food production (NF) and consumption (HC). The findings reveal that a total of 325 kt P was imported by Spain in 2012; 66% of which was accumulated in markets stock of food and feed, fertilizers and non-food (91 kt P) while 33% was lost to the environment through land-fill, losses to water bodies, land accumulation and incineration. The largest proportion of losses is associated with water bodies (44.7 kt P) followed by agriculture and land accumulation (42.1 kt P). Wastewater treatment plants (WWTPs) received around 79.5 kt P within wastewater, with 60% being removed in sewage sludge. The 31.7 kt P discharged within final effluent represented the 71% of the total losses to water bodies. Around 69% of the sewage sludge was recycled to agriculture and 27% was sent directly to landfill including the ashes from incineration. Net accumulation was 1.84 kg P/cap which was similar to values reported for the EU-27 average (2.5 kg P/cap).
CitationÁlvarez, J., Roca, M., Valderrama, C., Cortina, J. A phosphorous flow analysis in Spain. "Science of the total environment", 15 Gener 2018, vol. 612, p. 995-1006.
URIhttp://hdl.handle.net/2117/109759
DOI10.1016/j.scitotenv.2017.08.299
ISSN0048-9697
Publisher versionhttp://www.sciencedirect.com/science/article/pii/S0048969717323203
Collections
Share: