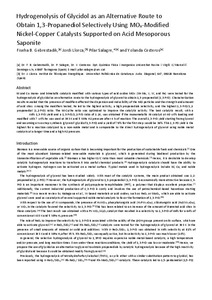 Salagre, Pilar
Cesteros, Yolanda
Document typeArticle
Rights accessOpen Access
All rights reserved. This work is protected by the corresponding intellectual and industrial property rights. Without prejudice to any existing legal exemptions, reproduction, distribution, public communication or transformation of this work are prohibited without permission of the copyright holder
Abstract
Ni and Cu mono- and bimetallic catalysts modified with various types of acid oxides MOx (M=Mo, V, W, and Re) were tested for the hydrogenolysis of glycidol as an alternative route to the hydrogenolysis of glycerol to obtain 1,3-propanediol (1,3-PrD). Characterization results revealed that the presence of modifiers affected the dispersion and reducibility of the NiO particles and the strength and amount of acid sites. Among the modifiers tested, Re led to the highest activity, a high propanediols selectivity, and the highest 1,3-PrD/1,2-propanediol (1,2-PrD) ratio. The Ni-Cu/Re ratio was optimized to improve the catalytic activity. The best catalytic result, with a 46 % 1,3-PrD yield and a 1,3-PrD/1,2-PrD ratio of 1.24, was obtained if the monometallic Ni catalyst at 40 wt % loading and modified with 7 wt % Re was used at 393 K and 5 MPa H2 pressure after 4 h of reaction. The overall 1,3-PrD yield starting from glycerol and assuming a two-step synthesis (glycerol¿glycidol¿1,3-PrD) and a yield of 78 % for the first step would be 36 %. This 1,3-PD yield is the highest for a reaction catalyzed by a non-noble metal and is comparable to the direct hydrogenolysis of glycerol using noble metal catalysts at a longer time and a high H2 pressure.
CitationGebrestadik, F., Llorca, J., Salagre, P., Cesteros, Y. Hydrogenolysis of glycidol as an alternative route to obtain 1,3-propanediol selectively using MOx-modified nickel-copper catalysts supported on acid mesoporous saponite. "ChemCatChem", 10 Octubre 2017, vol. 9, núm. 19, p. 3670-3680.
URIhttp://hdl.handle.net/2117/109746
DOI10.1002/cctc.201700536
ISSN1867-3880
Publisher versionhttp://onlinelibrary.wiley.com/doi/10.1002/cctc.201700536/abstract;jsessionid=B6FAD6424611D29D647BD19A191103E0.f02t04
Collections
Share: