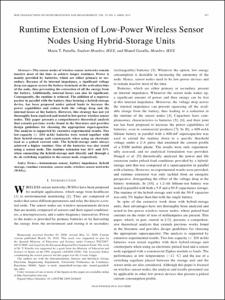 Document typeArticle
Rights accessOpen Access
All rights reserved. This work is protected by the corresponding intellectual and industrial property rights. Without prejudice to any existing legal exemptions, reproduction, distribution, public communication or transformation of this work are prohibited without permission of the copyright holder
Abstract
The sensor nodes of wireless sensor networks remain inactive most of the time to achieve longer runtimes. Power is mainly provided by batteries, which are either primary or secondary. Because of its internal impedance, a significant voltage drop can appear across the battery terminals at the activation time of the node, thus preventing the extraction of all the energy from the battery. Additionally, internal losses can also be significant. Consequently, the runtime is reduced. The addition of a supercapacitor in parallel with the battery, thus forming a hybrid-storage device, has been proposed under pulsed loads to increase the power capabilities and reduce both the voltage drop and the internal losses at the battery. However, this strategy has not yet thoroughly been analyzed and tested in low-power wireless sensor nodes. This paper presents a comprehensive theoretical analysis that extends previous works found in the literature and provides design guidelines for choosing the appropriate supercapacitor. The analysis is supported by extensive experimental results. Two low-capacity (< 200 mAh) batteries were tested together with their hybrid-storage unit counterparts when using an electronic load as a pulsed current sink. The hybrid-storage units always achieved a higher runtime. One of the batteries was also tested using a sensor node. The runtime extension was 16% and 33% when connecting the hybrid-storage unit directly and through a dc–dc switching regulator to the sensor node, respectively.
CitationPenella, M.; Gasulla, M. Runtime extension of low-power wireless sensor nodes using hybrid-storage units. "IEEE transactions on instrumentation and measurement", Març 2010, vol. 59, núm. 4, p. 857-865.
URIhttp://hdl.handle.net/2117/10973
DOI10.1109/TIM.2009.2026603
ISSN0018-9456
Publisher versionhttp://ieeexplore.ieee.org/xpls/abs_all.jsp?isnumber=5427296&arnumber=5416312&tag=1
Collections
Share: