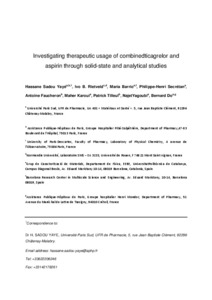 Secrétan, Philippe-Henri
Faucheron, Antoine
Karoui, Maher
Tilleul, Patrick
Yagoubi, Najet
Do, Bernard
Document typeArticle
Rights accessOpen Access
Abstract
The mainstay treatment for patients with acute coronary syndrome is an oral route dual antiplatelet therapy with a P2Y12-receptor antagonist and Aspirin (ASA). To improve patient adherence to such treatments, combination therapies (polypill) are envisioned. Physicochemical solid-state studies have been carried out to develop a preformulation strategy of ASA with the P2Y12-receptor antagonist Ticagrelor (TIC). The investigations were carried out using differential scanning calorimetry, liquid chromatography-high resolution-multistage mass spectrometry (LC-HR-MSn) and as complementary techniques Fourier transform infrared measurements and thermogravimetric analysis. A simple eutectic transition at 98 °C with a mole fraction for the eutectic liquid of 0.457 has been observed and the mixing of ASA and TIC molecules in each other's crystal structures appears to be limited. No cocrystals of TIC and ASA have been found. The appearance of the eutectic liquid was linked with a clear onset of chemical instability of the two pharmaceuticals. The decomposition mechanism in the liquid phase involves prior decomposition of ASA, whose residues react with well-identified TIC interaction sites. Seven interaction products were observed by LC-HR-MSn linked to corresponding degradation products. The most important degradation pathway is N-dealkylation. In conclusion, polypills of ASA and TIC are a viable approach, but the decomposition of ASA should be avoided by eliminating high temperatures and high humidity.
CitationSadou, H., Rietveld, I., Del Barrio, M., Secrétan, P., Faucheron, A., Karoui, M., Tilleul, P., Yagoubi, N., Do, B. Investigating therapeutic usage of combined Ticagrelor and Aspirin through solid-state and analytical studies. "European journal of pharmaceutical sciences", 30 Setembre 2017, vol. 107, p. 62-70.
URIhttp://hdl.handle.net/2117/109687
DOI10.1016/j.ejps.2017.06.031
ISSN0928-0987
Publisher versionhttp://www.sciencedirect.com/science/article/pii/S0928098717303809
Collections
Share: