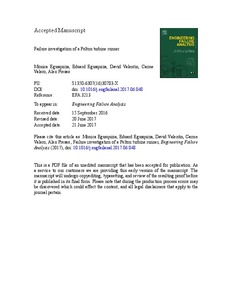 Document typeArticle
PublisherElsevier
Rights accessOpen Access
Abstract
In this paper, an uncommon failure of a Pelton turbine has been analyzed. After the monitoring system detected a sudden increase in the vibration levels, the turbine was inspected. The inspection showed that a fragment of one bucket broke off during operation. Moreover there were several buckets with cracks, always located in the same side of the buckets. An analysis of the detached fragment revealed a fatigue problem.After the damage was found, the vibration signatures measured by the monitoring system before damage, with damage and after repair, were analyzed. Before damage occurred, an excessive axial vibration and the excitation of several natural frequencies of the turbine were detected in the measured vibration.In order to identify the origin of the problem the first task was to analyze the dynamic response of the turbine. A numerical model of the runner using the finite element method (FEM) was done. Experimental research using modal analysis techniques (EMA) was also carried out in the turbine runner. The results of the numerical model were compared with the experimental results obtained. With the validated numerical model natural frequencies and mode-shapes were determined and studied.The next step was to determine experimentally the influence of the mounting conditions on the runner dynamics and the transmissibility of the runner vibrations to the machine bearings where the monitoring sensors are located.From the results of this study it was concluded that the natural frequencies excited during machine operation had axial mode shapes indicating that axial forces were applied to the runner. In a Pelton turbine, this can only be produced by a misaligned jet.To determine the influence of a misaligned jet on the bucket stresses, the dynamic behavior of the runner was performed. The dynamic force of the water jet was applied to the runner bucket. The results showed that with a misaligned jet the dynamic stress distribution increases in one side of the bucket with a maximum stress located where the cracks appeared.
CitationEgusquiza, M., Egusquiza, E., Valentin, D., Valero, M., Presas, A. Failure investigation of a Pelton turbine runner. "Engineering failure analysis", Novembre 2017, vol. 81, p. 234-244.
URIhttp://hdl.handle.net/2117/109565
DOI10.1016/j.engfailanal.2017.06.048
ISSN1350-6307
Publisher versionhttp://www.sciencedirect.com/science/article/pii/S135063071630783X?via%3Dihub
Collections
Share: