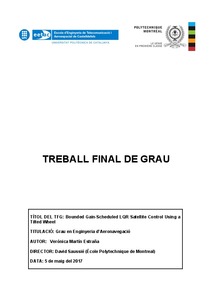 From the beginning of the satellite usage, the momentum created by its movements has been a concern that has to be taken into account for every space mission. Depending on the dimensions, weight and objective during its use, a momentum e xchange device might, actually, be one of the best systems to control the satellite attitude in its three axis. In this paper, a tilted wheel system with variable tilt angles and wheel acceleration, plus a redundant wheel spinning at constant speed in opp osite direction, is studied as a control system for a rigid satellite model. From the mathematical model of the satellite body and the tilted wheel system, a Simulink diagram is used to simulate their implementations in the satellite. On top of it, a clas sical LQR and Set - Point Tracking LQR control law are studied to control the satellite system. These control laws have proven to be worth to take them into consideration to control the whole system. By its versatility, stability, rapidity and optimal result s, LQR is a good option to control a rigid satellite with a tilted wheel as momentum exchange device. In addition, the tilted wheel has demonstrated to surpass all the previous momentum exchange actuators capabilities, making it one of the best systems to control a body by momentum. Using the LQR control law previously commented, a further study was done using a High Performance Bounded Gain - Scheduled control. In this variation of LQR, a gain tuning law is imposed for a better response of the satellite, a djusting the gains in relation with the response obtained in every time. This method allows solving analytically the algebraic Ricatti equation, not as LQR that solves it numerically. Regarding this second study, a faster response was obtained, as expected from the theoretical part. Despite the successful results obtained in the simulations. A further study should be needed for a better implementation of the constraints, such as the slew rate
SubjectsArtificial satellites, Satèl·lits artificials
URIhttp://hdl.handle.net/2117/109531