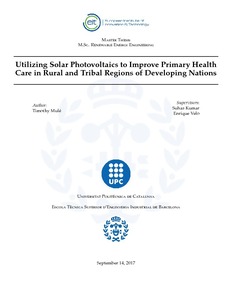 Document typeMaster thesis
Rights accessOpen Access
Abstract
This report focuses on rural and tribal regions of India to evaluate the ways that solar photovoltaic technology can supplement their lack of energy access, in an effort to improve the health care available to those communities. The report examines three separate case studies that have been carried out in India: the implementation of solar photovoltaic systems into primary health centers in rural parts of southern India to combat issues of intermittent or non-existent grid connected electricity, the deployment and analysis of solar direct drive vaccine refrigeration systems in these same areas to preserve the potency of vaccines and medicines needed by these communities, as well as an examination of a proposal for a solar powered boat ambulance to assist in providing primary health care, supplies, and transport to isolated tribal communities in eastern India. The study on the primary health centers has shown that the implementation of solar systems in these facilities has lead to an average 31% savings in monthly electricity bills and equal reduction in demand from electricity from the grid, while increasing their overall reliability of electricity access. The solar direct drive vaccine refrigeration field study has revealed that these systems are capable of keeping their contents within the required temperature limits in the field, and surveys have shown they have many preferably qualities when compared to conventional units. Finally the study of the solar powered boat ambulance has revealed that the latest evaluated design would be able to service a distance of 25 kilometers in the month of the worst solar irradiation. This would adequately serve the tribal population in the region and would aid in combatting the poor conditions and undesirable health practices currently being implemented there. The analysis of these cases involves the use MATLAB and Simulink software to determine the capabilities of the technologies used and the benefits from their implementation. The analyses reveal the potential to improve patient outreach and overall health of the communities in these isolated region by filling the gaps in their current energy demand with solar photovoltaics. It is the hope that these learnings can serve as a reference for future projects in India and other developing nations around the world.
SubjectsPhotovoltaic power generation, Developing countries, Energia solar fotovoltaica, Països en vies de desenvolupament
URIhttp://hdl.handle.net/2117/109428
Collections
Share: