Recovery of ammonium by powder synthetic zeolites from wastewater effluents: optimization of the regeneration step 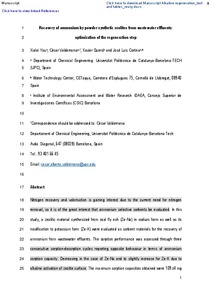 Document typeArticle
Rights accessOpen Access
Abstract
Nitrogen recovery and valorization is gaining interest due to the current need for nitrogen removal, so it is of great interest that ammonium-selective sorbents be evaluated. In this study, a zeolitic material synthesized from coal fly ash (Ze–Na) in sodium form as well as its modification to potassium form (Ze–K) were evaluated as sorbent materials for the recovery of ammonium from wastewater effluents. The sorption performance was assessed through three consecutive sorption-desorption cycles reporting opposite behavior in terms of ammonium sorption capacity. Decreasing in the case of Ze–Na and to slightly increase for Ze–K due to alkaline activation of zeolite surface. The maximum sorption capacities obtained were 109 ± 4 mg NH4/g and 33 ± 1 mg NH4/g for Ze–Na and Ze–K, respectively. It is important to point out that in the case of Ze–Na, the maximum sorbent capacity was obtained during the first sorption cycle whereas in the case of Ze–K, it was obtained during the last working cycle due to the alkaline regeneration. Kinetic studies showed that after every regeneration step, the sorption kinetics turn faster as alkaline desorption increased the zeolite-specific surface, thus increasing the size of porous and enhancing the diffusion through the particle. Results obtained indicate that sorption capacity decreased significantly after every working cycle using Ze–Na whereas Ze–K followed the opposite behavior despite its initial lower sorption capacity.
CitationYou, X., Valderrama, C., Querol , X., Cortina, J. Recovery of ammonium by powder synthetic zeolites from wastewater effluents: optimization of the regeneration step. "Water, air and soil pollution", 1 Octubre 2017, vol. 228, p. 396-1-396-11.
URIhttp://hdl.handle.net/2117/109414
DOI10.1007/s11270-017-3577-0
ISSN0049-6979
Collections
Share: