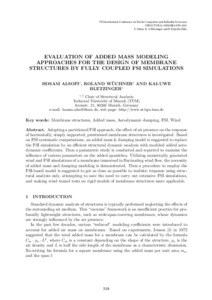 Adopting a partitioned FSI approach, the effect of air presence on the response of horizontally, simply supported, prestressed membrane structures is investigated. Based on FSI systematic computations, an added mass & damping model is suggested to replace the FSI simulation by an efficient structural dynamic analysis with modeled added aero- dynamic coefficients. Then a parametric study is conducted and reported to examine the influence of various parameters on the added quantities. Utilizing numerically generated wind and FSI simulations of a membrane immersed in fluctuating wind flow, the necessity of added mass and damping modeling is demonstrated. Then a procedure to employ the FSI-based model is suggested to get as close as possible to realistic response using struc- tural analysis only, attempting to save the need to carry out extensive FSI simulations, and making wind tunnel tests on rigid models of membrane structures more applicable.
URIhttp://hdl.handle.net/2117/109362
ISBN978-94-944-244-8-9