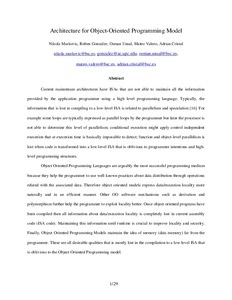 Document typeExternal research report
Rights accessOpen Access
Abstract
Current mainstream architectures have ISAs that are not able to maintain all the information provided by the application programmer using a high level programming language. Typically, the information that is lost in compiling to a low-level ISA is related to parallelism and speculation [14]. For example some loops are typically expressed as parallel loops by the programmer but later the processor is not able to determine this level of parallelism; conditional execution might apply control independent execution that at execution time is basically impossible to detect; function and object-level parallelism is lost when code is transformed into a low-level ISA that is oblivious to programmer intentions and high-level programming structures. Object Oriented Programming Languages are arguably the most successful programming medium because they help the programmer to use well-known practices about data distribution through operations related with the associated data. Therefore object oriented models express data/execution locality more naturally and in an efficient manner. Other OO software mechanisms such as derivation and polymorphism further help the programmer to exploit locality better. Once object oriented programs have been compiled then all information about data/execution locality is completely lost in current assembly code (ISA code). Maintaining this information until runtime is crucial to improve locality and security. Finally, Object Oriented Programming Models maintain the idea of memory (data memory) far from the programmer. These are all desirable qualities that is mostly lost in the compilation to a low-level ISA that is oblivious to the Object-Oriented Programming model. This report considers implementing the Object Oriented (OO) Programming Model directly in the hardware to serve as a base to exploit object/level parallelism, speculation and heterogeneous computing. Towards this goal, we present new computer architecture that implements the OO Programming Models. All its hardware structures are objects and its Instruction Set directly utilizes objects hiding totally the notion of memory and other complex hardware structures. It also maintains all high-level programming language information until execution time. This enables efficient extraction of available parallelism in OO serial or parallel code at execution time with minimal compiler support. We will demonstrate the potential of this novel computer architecture through several examples.
CitationMarkovic, N., González, R., Unsal, O., Valero, M., Cristal, A. "Architecture for object-oriented programming model". 2009.
Is part ofUPC-DAC-RR-CAP-2009-35
URIhttp://hdl.handle.net/2117/109269
Collections
Share: