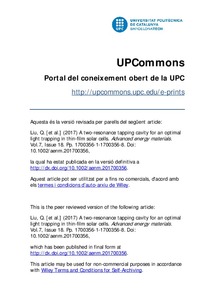 Document typeArticle
Rights accessOpen Access
All rights reserved. This work is protected by the corresponding intellectual and industrial property rights. Without prejudice to any existing legal exemptions, reproduction, distribution, public communication or transformation of this work are prohibited without permission of the copyright holder
Abstract
An optimal photon absorption in thin film photovoltaic technologies can only be reached by effectively trapping the light in the absorber layer provided a considerable portion of the photons is rejected or scattered out of such layer. Here, a new optical cavity is proposed that can be made to have a resonant character at two different nonharmonic frequencies when adjusting the materials or geometry configurations of the partially transmitting cavity layers. Specific configurations are found where a reminiscence of such two fundamental resonances coexists leading to a broadband light trapping. When a PTB7-Th:PC71BM organic cell is integrated within such cavity, a power conversion efficiency of 11.1% is measured. This study also demonstrates that when materials alternative to organics are used in the photoactive cell layer, a similar cavity can be implemented to also obtain the largest light absorption possible. Indeed, when it is applied to perovskite cells, an external quantum efficiency is predicted that closely matches its corresponding internal one for a broad wavelength range.
Description
This article may be used for non-commercial purposes in accordance with Wiley Terms and Conditions for Self-Archiving.
CitationLiu, Q., Romero, P., Mantilla, P., Colodrero, S., Toudert, J., Martorell, J. A two-resonance tapping cavity for an optimal light trapping in thin-film solar cells. "Advanced energy materials", 20 Setembre 2017, vol. 7, núm. 18, p. 1700356-1-1700356-8.
URIhttp://hdl.handle.net/2117/109268
DOI10.1002/aenm.201700356
ISSN1614-6832
Publisher versionhttp://onlinelibrary.wiley.com/doi/10.1002/aenm.201700356/abstract
Collections
Share: