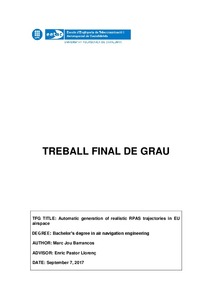 Document typeBachelor thesis
Rights accessOpen Access
Abstract
RPAS have become steadily a more present part in the civil lives. Since their appearance, researchers have been looking for solutions in which these unmanned aircrafts could be implemented to ease the daily life. This report contains all the steps that have been made in order to demonstrate another of these solutions, the viability of substituting big cargo aicrafts for RPAS. In this project, it will be developed a software capable of creating a large number of routes for a fictitious airline company for a specified time period, using actual data. The software will be able to: read and manipulate external files with the historical data of an airline; process all these data and organize them in a data structure where a whole series of routes will be generated; return files with all this information and also create other special files to be incorporated into another program. The final trajectories generated will also be represented on a European map where it will be simulated its movement through Google Earth. These trajectories will be generated from real data and always using the most realistic parameters in order to achieve a better generation. Through this project, the feasibility of being able to create a program capable of automating the whole generation of trajectories which can later be performed by RPAS will be demonstrated. To compare the results generated in this software with the how real trajectories behave in normal traffic, these trajectories will be compared with those generated individually with the same data using a specific software.
SubjectsDrone aircraft, Avions no tripulats
URIhttp://hdl.handle.net/2117/109251
Collections
Share: