Ethical and Psychological Factors in 5S and Total Productive Maintenance 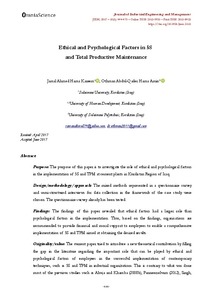 Show full item record
Kareem, Jamal Ahmed Hama
Amin, Othman Hama
Document typeArticle
PublisherOmniaScience
Rights accessOpen Access
Abstract
Purpose: The purpose of this paper is to investigate the role of ethical and psychological factors in the implementation of 5S and TPM at cement plants in Kurdistan Region of Iraq. Design/methodology/approach: The mixed methods represented in a questionnaire survey and semi-structured interviews for data collection in the framework of the case study were chosen. The questionnaire survey already has been tested. Findings: The findings of this paper revealed that ethical factors had a larger role than psychological factors in the implementation. Thus, based on the findings, organisations are recommended to provide financial and moral support to employees to enable a comprehensive implementation of 5S and TPM aimed at obtaining the desired results. Originality/value: The current paper tried to introduce a new theoretical contribution by filling the gap in the literature regarding the important role that can be played by ethical and psychological factors of employees in the successful implementation of contemporary techniques, such as 5S and TPM in industrial organizations. This is contrary to what was done most of the previous studies such as Ahuja and Khamba (2008b), Panneerselvam (2012), Singh, Gohil, Shah and Desai (2013) and Poduval and Pramod (2015) in the area of 5S and TPM. Where, these studies have focused on studying the other factors such as (organizational, technological, operational and others) in implementing 5S and TPM. This without realizing the fact that it is also necessary to examine factors such as (ethical and psychological) that would affect the capabilities and employee morale before and during the implementation of those techniques (5S and TPM) that are used to bring out the best productivity.
Location
1: Kurdistan, Iran
CitationKareem, J. A. H.; Amin, O. H. Ethical and Psychological Factors in 5S and Total Productive Maintenance. "Journal of Industrial Engineering and Management", Setembre 2017, vol. 10, núm. 3, p. 444-475.
URIhttp://hdl.handle.net/2117/109212
DOI10.3926/jiem.2313
DLB-28744-2008
ISSN2013-0953
Collections
Share: