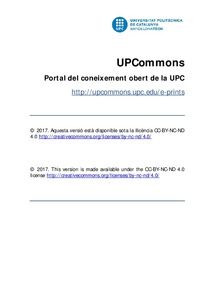 Except where otherwise noted, content on this work is licensed under a Creative Commons license : Attribution-NonCommercial-NoDerivs 3.0 Spain
Abstract
Consideration is given to the possibility to use changes in buoyancy as a negative reactivity feedback mechanism during temperature transients in heavy liquid metal fast reactors (HLMFRs). It is shown that by the proper use of heavy pellets in the fuel elements, fuel rods could be endowed with a passive self-ejection mechanism and then with a negative feedback. A first estimate of the feasibility of the mechanism is calculated by using a simplified geometry and model. If in addition, a neutron poison pellet is introduced in the bottom of the fuel, then when the fuel element is displaced upward by buoyancy force, the reactivity will be reduced not only by disassembly of the core but also by introducing the neutron poisson from the bottom. The use of induced buoyancy opens up the possibility of introducing greater amounts of actinides into the core, as well as providing a palliative solution to the problem of positive coolant temperature reactivity coefficients that could be featured by the HLMFRs.
CitationArias, F.J. A negative reactivity feedback driven by induced buoyancy after a temperature transient in lead-cooled fast reactors. "Nuclear engineering and technology", 24 Octubre 2017, vol. 50, num. 1, p.80-87.
URIhttp://hdl.handle.net/2117/109164
DOI10.1016/j.net.2017.10.001
ISSN1738-5733
Publisher versionhttp://www.sciencedirect.com/science/article/pii/S1738573317302784
Collections
Share: