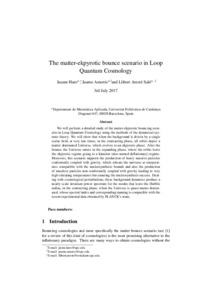 Aresté Saló, Llibert
Document typeArticle
Rights accessOpen Access
Abstract
We will perform a detailed study of the matter-ekpyrotic bouncing scenario in Loop Quantum Cosmology using the methods of the dynamical systems theory. We will show that when the background is driven by a single scalar field, at very late times, in the contracting phase, all orbits depict a matter dominated Universe, which evolves to an ekpyrotic phase. After the bounce the Universe enters in the expanding phase, where the orbits leave the ekpyrotic regime going to a kination (also named deflationary) regime. Moreover, this scenario supports the production of heavy massive particles conformally coupled with gravity, which reheats the universe at temperatures compatible with the nucleosynthesis bounds and also the production of massless particles non-conformally coupled with gravity leading to very high reheating temperatures but ensuring the nucleosynthesis success. Dealing with cosmological perturbations, these background dynamics produce a nearly scale invariant power spectrum for the modes that leave the Hubble radius, in the contracting phase, when the Universe is quasi-matter dominated, whose spectral index and corresponding running is compatible with the recent experimental data obtained by PLANCK's team.
CitationHaro, J., Amoros, J., Aresté, L. The matter-ekpyrotic bounce scenario in Loop Quantum Cosmology. "Journal of cosmology and astroparticle physics", 1 Setembre 2017, vol. 2017, núm. 9.
URIhttp://hdl.handle.net/2117/109151
DOI10.1088/1475-7516/2017/09/002
ISSN1475-7516
Publisher versionhttp://iopscience.iop.org/article/10.1088/1475-7516/2017/09/002/meta
Collections
Share: