How does social media affect the behaviours of managers and employees in non-democratic countries? 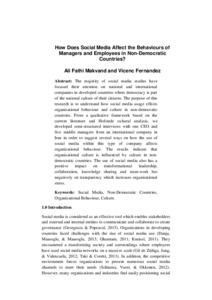 Document typeArticle
Rights accessOpen Access
Abstract
The majority of social media studies have focused their attention on national and international companies in developed countries where democracy is part of the national culture of their citizens. The purpose of this research is to understand how social media usage effects organisational behaviour and culture in non-democratic countries. From a qualitative framework based on the current literature and Hofstede cultural analysis, we developed semi-structured interviews with one CEO and five middle managers from an international company in Iran in order to suggest several ways on how the use of social media within this type of company affects organisational behaviour. The results indicate that organisational culture is influenced by culture in non-democratic countries. The use of social media also has a positive impact on transformational leadership, collaboration, knowledge sharing and team-work but negatively on transparency which increases organisational stress.
CitationMakvand, A.F., Fernandez, V. How does social media affect the behaviours of managers and employees in non-democratic countries?. "International journal of web based communities", 4 Setembre 2017, vol. 13, núm. 3, p. 321-343.
URIhttp://hdl.handle.net/2117/109144
DOI10.1504/IJWBC.2017.086590
ISSN1477-8394
Publisher versionhttp://www.inderscience.com/offer.php?id=86590
Collections
Share: